THE ART OF DR. SEUSS

By the time Ted Geisel arrived in Paris in 1926, the surrealist movement had already become a force with its first group show Exposition Surréaliste taking place in 1925. Joan Miró and Paul Klee would also show solo in Paris that year, then Yves Tanguy in 1927 and Salvador Dalí in 1929. Ted, in the right place at the right time, considered Paris the exhilarating axis of his world, and he absorbed anything the arts offered.

“llustrator by day, surrealist by night, Dr. Seuss created a body of irrepressible work during his leisure hours that would redefine him as an iconographic American artist. 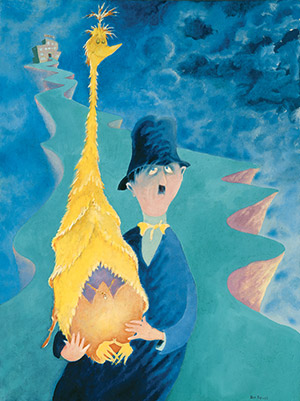 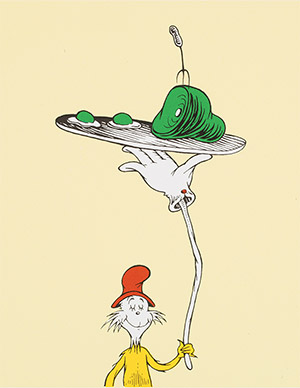 Above are two examples that display Geisel's Surrealistic tendencies.  Top: A Man Who Has Made an Unwise Purchase  Bottom:  Inside Cover Illustration for Green Eggs and Ham

This early and powerful influence of surrealism stayed with Ted throughout adulthood and is realized in his Secret Art paintings. Illustrator by day, surrealist by night, Dr. Seuss created a body of irrepressible work during his leisure hours that would redefine him as an iconographic American artist. Revealing a dazzling rainbow of hues not seen in the primary-color palette of his books for children, these paintings exhibit a sophisticated, technically accomplished, and often quite unrestrained side of his talent.

While Ted wanted to protect his Secret Art from criticism, he always intended for the work to be seen when he was gone. In 1997, this dream was realized when The Art of Dr. Seuss project was launched. For the first time collectors were able to see and acquire lithographs, serigraphs, and sculptures reproduced from Ted’s original drawings and paintings. In her introduction to the collection Audrey Geisel wrote: “I remember telling Ted that there would come a day when many of his paintings would be seen and he would thus share with his fans another facet of himself—his private self. That day has come. I am glad.”

This historic project has opened the world’s eyes to the unique artistic talent of Dr. Seuss and, as such, galleries, museums, and collectors have helped make Audrey Geisel’s promise, and Dr. Seuss’s dream, a reality.

All information excerpted from: Secrets of the Deep, the Lost, Forgotten, and Hidden Works of Theodor Seuss Geisel and The Cat Behind the Hat